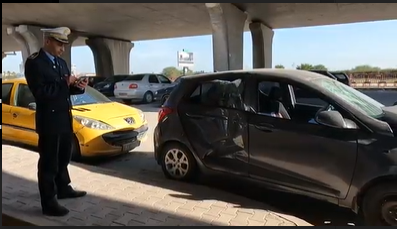 LEARN is a joint initiative between IRF and the Alliance, which brings together national government officials, police, road safety NGOs, private sector, and academia to learn how to gather and analyze road safety data more effectively and to use that data to implement effective interventions that will reduce road deaths and injuries. Through the project, the partners create and implement a joint action plan for a specific project, utilizing the strengths and experiences of their different sectors. It has so far been implemented in six countries in Africa.

In Tunisia, LEARN has helped to synchronize the efforts of government agencies, the road safety observatory, police, NGOs, and private sector to collect, share, and use crash and road death data more effectively so that road safety interventions can be targeted more accurately for greatest effect. Prior to the LEARN Tunisia project, the road crash and death data was held by Ministry of the Interior, collected and managed by the traffic police and national guard, and analyzed by the national road safety observatory (ONSR). Data was recorded on paper, was inconsistent, and did not identify details such as the age, gender, or other details of victims, nor exactly where the crash happened. It was cumbersome for police officers to complete.

Through LEARN, Alliance member Les Ambassadeurs de la Securite Routiere (ASR) built a coalition including the Ministries of Interior, Health, and Transport to share data across departments more effectively and support the implementation of a new digital data collection tool in collaboration with ONSR. The new collection tool replaced the paper forms used by police to record crash details with a digital app, that automatically records the geolocation of the crash. Using the app, police officers can quickly record details such as the age of victims, whether they were wearing a seatbelt, the state of the road, the weather and the circumstances of the crash. The data feeds from the app to the government database, where it can be analyzed by ONSR.

Previously, ASR published a study within the framework of the Botnar Tunisia Challenge that recommended improvements to the national data collection system. The recommendation was validated and approved by the government’s steering committee which gathers all the ministries involved in road safety in Tunisia.

To create the new joint database, each partner needed to use their expertise: academics from the national road safety observatory were able to advise on what data was needed. Police officers, who are those tasked with collecting the data after a crash, provided practical inputs to make sure that the expectations were realistic and that they would be able to gather quality inputs. Government analysts were responsible for designing the new system in such a way that it would be easy to use. NGOs were a significant force in bringing the coalition together and convincing the partners of its value. They were also involved in the development, pilot, and evaluation of the tool.

On Thursday 10 November, the stakeholders gathered together for the second LEARN workshop. Its purpose was to discuss the next steps to improve the data collecton tool to make it even more efficient. Coalition partners discussed adoption of a set of definitions, values, and variables for regulatory texts to ensure consistency with international standards. The workshop also enhanced the sense of ownership of the LEARN project and looked at ways to unlock resources to support the coalition.

The new database has already been implemented in a pilot experiment that lasted six months and was completed in September 2022. The evaluation report is being finalized and its recommendations will strengthen ASR’s advocacy for 30 km/h zones. A national law for 30 km/h limits outside schools is in its final stages and the data from the new crash database will help provide the necessary evidence to demonstrate why this new law is needed.

Afef Ben Ghenia, President of ASR, says “Without reliable and exhaustive data, we cannot have a clear vision of the causes of traffic crashes. Improving our data is a priority because it is the only way to be able to act correctly and to plan strategies capable of reducing tragedies.”

The post Tunisia: Better data for safer roads through LEARN appeared first on Global Alliance of NGOs for Road Safety.